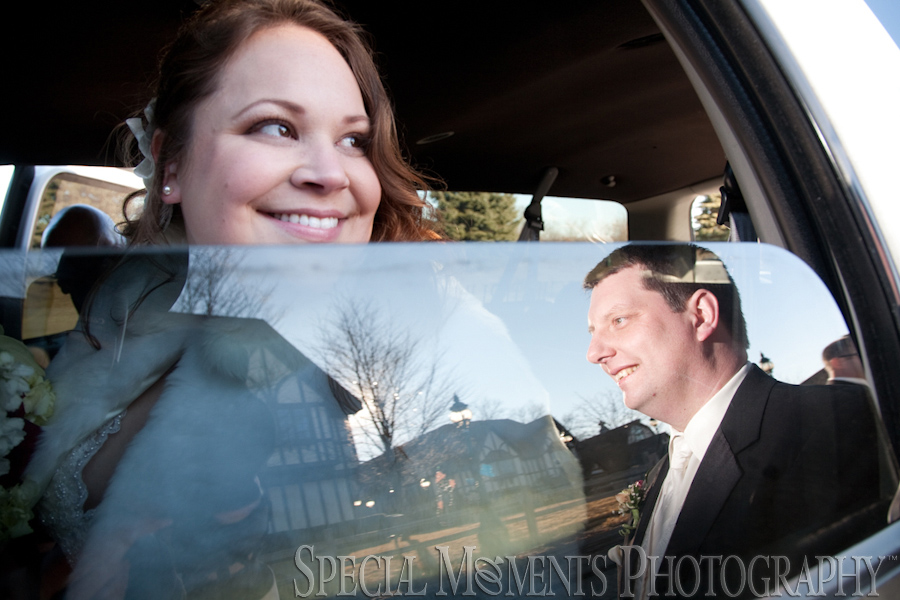 Carol & Patrick found us on the Knot!  Carol is a photographer herself and it is a real honor to be able to work for a fellow artist.  Their ceremony took place at Kings Court Castle in Lake Orion.  What a fun loving couple!  Carol had some really cool ideas for making their day shine!  They didn’t want to see each other before the wedding but we got some cute shots  of them holding hands behind closed doors!  The ceremony was in the chapel at the Kings Court Castle.  The  stained glass window is from the turn of the century, and only 4 were made.  One was sold in Japan for over $1,000,000.  It is exquisite.  Shortly after family photos were taken they all went for a ride on the beautiful reproduction 19th century German Carousel located in the Canterbury Pavilion. The reception was held at Myth Golf and Banquet Hall in Oakland.  Bride, groom, and bridal party all were willing to go have some fun on the golf course even though is was the beginning of February!  The Picture Frame theme was continued on into the evening with the cake topper, and the table numbers!  Their personality was felt all evening and you just had to smile!  We even went out later in the evening for some “sparkler” night shots.  Thank you Carol and Patrick for allowing us to be part of your wedding day.   We loved working for you!

Thank you Carol, I loved working for you! It was a lot of fun, but I kind of knew that was going to be the case the first time I met you! Some of the ideas you kicked out for us to try were a real treat and I really enjoyed looking over them during the edit process. I wish you all Patrick all the best and thanks again Carol.

Awesome! You did a beautiful job capturing every detail of this special day for Carol and Patrick.

Patrick was amazing! Not only did he have countless ideas for capturing our wedding memories but he was so receptive to any suggestion we threw out there. Thank you for the beautiful portraits and for being so fun to work with! Ps. The updated website rocks!