Laavanya & Varun’s Wedding at The Hindu Temple of Canton MI 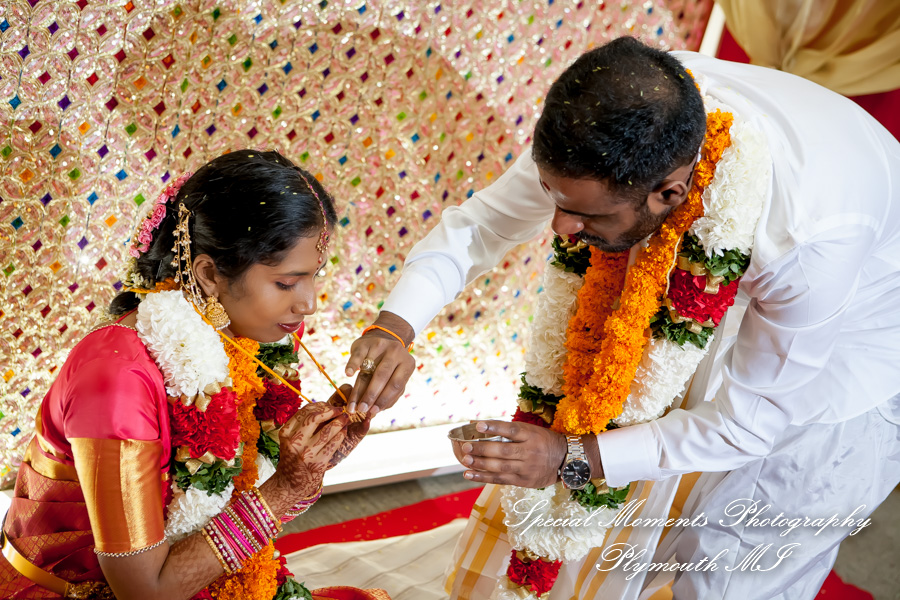 Love in the Time of covid-19… It persists and thrives. We got a phone call from the bride a couple of weeks before the event wondering if we could photograph her micro wedding at the Hindu Temple of Canton MI. It was a wonderful conversation and we took on the project. The idea was to spend 2 or 3 hours covering just the primary service. Typically we get hired for multi-day events by the Indian community. In today’s world that’s all on hold. Our goal and challenge was to capture something absolutely stunning with what was happening in a condensed and small environment. The Hindu Temple of Canton has a room in the back dedicated for a smaller wedding. We arrived early in the morning for a few photos of the couple before the service began. We worked around the outside of the building and in front. It’s a beautiful Temple. We found some very nice spots and didn’t have to travel far.

We started out with a pre-service ceremony with the bride and groom in the Main Prayer Hall but the majority of the service took place under the Hindu traditional mandap set up in the room. We have worked with priest Shri Prasad Ishwara before and he is fantastic! The main service commenced and the traditional Hindu service was underway. Photographing the Hindu services is absolutely gorgeous for us. There is so much rich tradition that goes on and though most of it is spoken in the ancient Sanskrit language and we don’t understand a lot of the nuance, our goal is to watch and record the various things as they unfold.

About halfway through the priest broke away and the bride changed outfits. The second half of the service commenced. After the completion of the service we took our family photos. Though we only showed a few of the family photos we took numerous groupings of the immediate family & friends who were in attendance. The bride and groom shared some wedding cake then we processed back into the Main Prayer Hall for the final blessing.

We absolutely enjoy photographing Hindu services and have some additional photos at this link. They are so full of rich traditions; it would be very interesting to have a translator give a recorded commentary of the various parts of the service as they unfolded. I think the onlookers would get a great deal out of knowing the behind the scenes of these ancient traditions.

We wish the couple all the best in life endeavors. Thank you so much for letting us be a part of this event. Who says a micro wedding can’t be over-the-top beautiful!